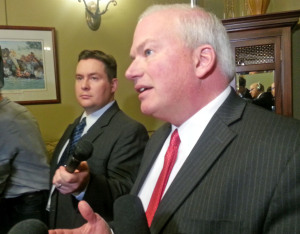 The top Republican in the state Senate expects changes to Wisconsin’s civil service system to pass early next year.

The bill unveiled earlier this year is aimed at speeding up the state’s hiring process and making it easier to fire problem employees. Republicans have said it’s needed to modernize a system that is overly complicated and has been open to abuse. Democrats counter that the changes open the door to politicizing the state’s workforce.

Senate Majority Leader Scott Fitzgerald said he believes the chamber is set to take up the legislation when lawmakers return in early January.  “Civil service will definitely come up in January, and we will pass it intact compared to what the Assembly has already sent over,” he said.

AUDIO: Sen. Fitzgerald expects the bill to pass in January (:24)

The legislation passed the Assembly this fall, but got tied up in the Senate, partially due to a dispute over a provision that prevents state agencies from asking about the criminal history of job applicants, unless it directly applies to the position. State Sen. Steve Nass (R-Whitewater) wanted the decision on whether to “ban the box” left up to the discretion of each state agency. Fitzgerald said discussions over the issue are ongoing and an amendment is still possible, but he still believes the chamber will approve the version passed out of the Assembly.