You are here: Home / Badgers / Clement can’t wait to turn the calendar page 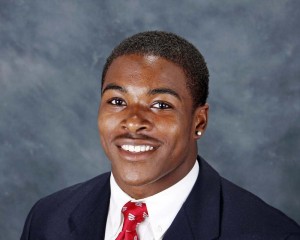 It has been a tough year for Wisconsin running back Corey Clement.

“I’m just waiting for the ball to drop and 2016 to come already,” Clement said before practice Wednesday. “I’m not liking 2015 too much and I don’t think  it is liking me, either.”

Clement spoke to reporters for the first time since he was suspended for the regular season finale by coach Paul Chryst, who learned Clement didn’t tell the truth about his role in a fight at his apartment on November 8.

Clement first told UW officials he had come to the aid of a security guard who was involved in a fight.Clement was later issued two disorderly conduct citations by the Madison Police Department after an investigation revealed Clement started the fight with several individuals.

Chryst met with Clement on the Wednesday before the Minnesota game and informed him he would not be traveling with the team for the game.

Clement said, “I wish I didn’t skew my story but it is a mistake that I hope to learn from. Coach Chryst has been a good part of this. If there is anybody I have to look up to from this situation, it is him. He has been nothing but a positive role model in how to handle these situations.”

“I think he has owned it, the responsibility,” Chryst said.  “I think you always feel better when players get it. Like this is why this is important. he didn’t need me to tell him that.”

Clement spent much of the season hampered by a sports hernia, originally diagnosed as a strained groin. He missed a good portion of the season after undergoing sports hernia surgery.  In three games, Clement carried the ball 29 times for 155 yards and four touchdowns.

The Badger running back originally had visions of entering the NFL Draft, but those plans quickly changed.  Clement said he’ll return for his senior season.

Clement has practiced with the team recently and hopes to play in the Holiday Bowl game in San Diego next Wednesday (Dec. 30).

Clement said he can’t wait to start preparing for the 2016 season and is looking for bigger and better things.