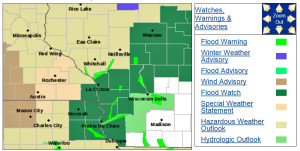 With flood warnings that could last until next week on portions of 8 Wisconsin rivers, Santa may be forced to deliver Christmas presents in a canoe instead of a sleigh. Portions of southwestern Wisconsin have received nearly 5 inches of rain since Sunday morning.

Flash flood watches remain in effect until mid-afternoon Monday in much of southern Wisconsin. Madison has already tied a record high for November 14, with 59 just before 5:00 a.m. Madison and Milwaukee both had records of 60 on Sunday.

In Green Bay, many fans didn’t have to wear gloves in the covered outdoor seats at Lambeau Field while watching the Packers beat Dallas — but they certainly needed their rain gear. Sturgeon Bay had its warmest low temperature in 95 years on Sunday, at 45 degrees. Fog was a problem. Milwaukee County sheriff’s deputies handled two dozen freeway crashes by early Sunday afternoon. There was some snow at locations in far northern Wisconsin — with Gile in Iron County getting 1.3 inches.

Forecasters predict more rain for Monday across most of Wisconsin, and snow in the northwest. The National Weather Service has flood warnings out for parts of the Pecatonica, Yellow, Fox, Sugar, Black, Baraboo, and Kickapoo rivers. Major floods are possible in some areas.