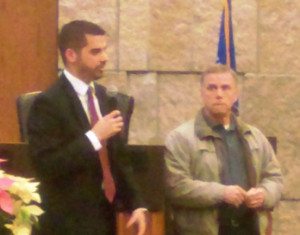 The Fond du Lac County Board Tuesday night unanimously passed a resolution opposing placement of a Milwaukee County sex offender in the town of Eldorado. The advisory resolution also opposes placement of any non-county sex offenders in Fond du Lac County. District Attorney Eric Toney said it mirrors action taken by the town with its own ordinances.

“They already had one in place, and they added another one that basically said they would only allow residents from Elodarado to be placed in their community,” Toney told the board. Toney said that ordinance and opposition from town residents had some influence on the state’s Department of Health Services, which is now withdrawing its request to place 51-year-old Clint Rhymes in Eldorado.

Sheriff Mick Fink said town residents did what they had to do with a meeting and letters to the judge – but they wanted to add the voices of county supervisors. “We’re not looking to beat any drums, what we’re looking to do is get some very good discussion going on,” Fink said. “We weren’t looking for a fight, what we were looking for was to bring this issue to light.”

A Milwaukee County judge was scheduled to hold a hearing on Wednesday to consider the placement of Rhymes.