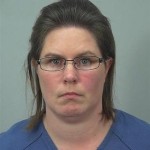 Green leads to orange for a former local official for the Dane County village of Black Earth. Thirty-five-year-old Stephanie Lathrop will serve two years in prison, after pleading guilty to stealing some $400,000 from the village and Vanguard Electric Commission, an electric utility operated by Black Earth and Mazomanie.

Lathrop entered guilty pleas in September to two counts of felony theft. Court documents show that Lathrop, of Sauk City, took the money while serving as clerk-treasurer for the village, beginning in 2009 until she was found out in 2013. Investigators said she pocketed money that utility customers brought in to pay their bills.

Dane County Circuit Judge Nicholas McNamara told Lathrop at her sentencing Monday that the thefts were too serious to allow her to avoid prison time. Lathrop will also serve eight years of extended supervision once her prison term is completed.