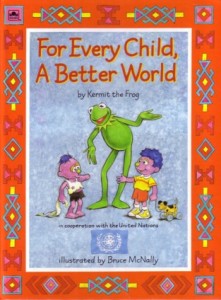 A special school committee in Marshfield said Wednesday that a book featuring Muppets’ character Kermit the Frog discussing issues such as poverty and homelessness should remain a part of the district’s kindergarten curriculum.

Questions about the use of the book were raised last July by Marshfield School Board member Mary Carney, who worried Jim Henson’s “For Every Child, A Better World” graphically deals with issues that are best left addressed by parents at a young age. “It’s very dark,” Carney said, “it’s very depressing. It shows poverty, it shows war. Which are worthwhile issues to discuss…I just felt they were inappropriate for kindergarteners.”

Carney’s request to remove the book has drawn national attention, from both news outlets and on social media. She said she never intended to suggest the book should be banned, and urged people to make their own conclusions.

The full School Board also met on Wednesday, but did not address the issue. It’s scheduled to act on the panel’s recommendation on January 13th.