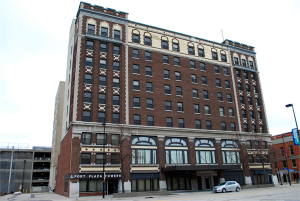 Developers of a 91-year-old hotel in downtown Green Bay planned to begin renovation work this week. Plans call for restoring the Hotel Northland to its historic grandeur, while developing the property into a boutique 160-room hotel with two full-service restaurants, catering, event space, a fitness center and spa.

According to a news release from the Northland’s branding and marketing agency, Frantz Community Investors and Keith P. Harenda of KPH Construction, work can now start on the restoration of the nine story building after finally closing on the property. Frantz Community Investors – the lead on the project – has said that the complex financial makeup of the $44 million plan has made closing on the property difficult. In April, the the final – and needed – pieces of funding for the project were announced: private financing and federal loan money.

“Completed in 1924, the hotel was one of the largest and most important buildings constructed in Green Bay prior to the end of World War II and reflected the city’s growth,” according to the Wisconsin Historical Society.

It also played a part in the history of the Green Bay Packers. “The Hotel Northland hosted a National Football League (NFL) conference in 1927 and served as NFL headquarters during three Green Bay-hosted championships in 1961, 1965, and 1967. In 1959, it was the setting of one of famed Packers head coach Vince Lombardi’s earliest press conferences.”

The newly redeveloped hotel is expected to employ 166 people full-time. “It’s quite a Christmas gift for us,” said Mike Frantz, one of the founders of Cedar Rapids, Iowa-based FCI in the news release.