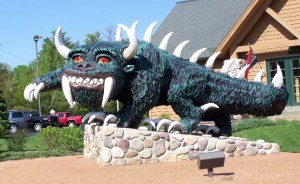 Police were tipped off that a claw reported missing from the statue earlier this month had been found at a home. Officers then arrested two men, ages 31 and 27, after they admitted to vandalizing the mythical beast. Oneida County prosecutors are considering charges against both men.

The city’s Chamber of Commerce estimates repairing the damage to the statue will cost more than $1,000.