You are here: Home / Business / Proposal would require WEDC to report fraud 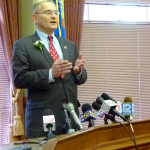 A proposal to fix problems at the Wisconsin Economic Development Authority would require that companies which misrepresent themselves in order to obtain taxpayer support be referred for possible prosecution. The audit committee charged with overseeing the WEDC approved the recommendation on Monday, and the full WEDC board will vote on it next week. The move comes in the wake of an audit which found WEDC often failed to track the jobs created by companies that were awarded state tax incentives.

Assembly Minority Leader Peter Barca (D-Kenosha) is on the WEDC board. “As a legislator and as a board member, I would hope we would follow all of the recommendations,” Barca said. “That’s what we did with the audit that came out two years ago, and that’s what I would like to see us do again.

Barca expects majority Republicans will propose changes to WEDC. “To really make this meaningful, you need to not just do window dressing. You need to have a significant and substantive reform package,” said Barca, who along with state Senator Julie Lassa has proposed a plan to overhaul WEDC.