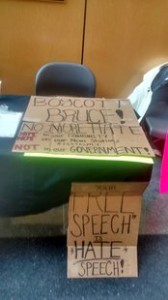 Some residents in Superior are still expecting the city’s mayor to walk back a social media comment about the president. Protesters gathered in Superior on Monday, hoping Mayor Bruce Hagen will apologize for a Facebook comment in which he referred to President Barack Obama as a Muslim.

“The protest is for him to retract his statement, and/or resign,” Kym Young with the Justice City Coalition told KDAL on Monday. Hagen issued a statement last week in which he said his comment was protected by his First Amendment right to free speech — and that he’d have nothing more to say on the matter.

Young said about 30 protesters turned out at the Superior Government Center. There were no arrests. “City council president Tom Fennessey came out and spoke with us, thanked us for keeping the protest peaceful and being respectful of the city hall, but also thanked us for bringing awareness to this,” she said.

Hagen is reportedly on vacation in Florida. “What we need the mayor to do is to take that first step and apologize, and then we can go from there,” Young said. “We are not uncompromising, but if he refuses to apologize, if he refuses to speak with the Muslim community and with the community at large over this issue then yes, we would wish him to resign.”

Hagen’s original Facebook comment was in regards to a picture of Michelle Obama, which had been posted by one of the mayor’s friends. The comment read, “She and her Muslim partner have destroyed the fabric of our democracy that was so very hard fought for.”