You are here: Home / Badgers / Bo Ryan announces retirement, Gard to get his chance (AUDIO) 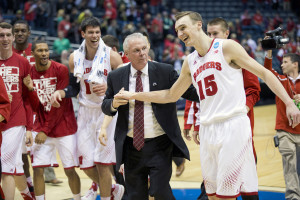 Bo Ryan went out a winner on Tuesday night, leading the Badgers to a 64-49 win over Texas A&M-Corpus Christi in what would be his final game as Wisconsin’s head basketball coach.  After the game, Ryan announced that he was stepping down immediately.

Ryan told reporters after the game that this was a decision months in the making.  Ryan said he brought this up to Athletic Director Barry Alvarez in April.  Alvarez advised Ryan to take some time to think it over.

Ryan said, “I have come to the conclusion that now is the right time for me to retire and for Greg Gard to have the opportunity to coach the team for the remainder of the season. I discussed this with Barry and I appreciate him giving me the space to make this decision.”

Gard, who is the Badgers associate head coach and has been with Ryan for more than two decades at UW-Platteville, UW-Milwaukee and the last 14-plus seasons in Madison, has been named the interim head coach for the rest of the season.

Alvarez said he’ll evaluate the work of Gard and the staff for the remainder of the season and decide then, whether to name Gard the full-time coach or look elsewhere.

Alvarez said about Bo Ryan, “He has put our basketball program on the map. He has done it in a class way. There comes a time when you have to step down. I’ve been there myself, I appreciate how he handled it.

“His record speaks for itself. He is a legend. He is a Hall of Famer. He has won his way at every level and leaves our basketball program in great shape.”

Alvarez also said he feels good about Greg Gard taking the job on an interim basis.

Ryan has led Wisconsin to back-to-back Final Fours and the school’s first appearance in the National Championship game since 1941.

Ryan leaves with a 364-130 record in Madison and a career total of 747 wins counting his time in Milwaukee and Division 3 Platteville.  He finished 172-68 (.717) in Big Ten play, the highest winning percentage in conference history.

AUDIO: Bo Ryan says you don’t always get to end the way you want to :12

AUDIO: Greg Gard says he’s fine with how Alvarez wants to approach the next coach :15