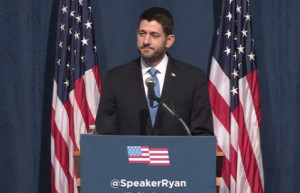 Trump said on Monday that the U.S. should ban all Muslims from entering the country because of concerns about terrorism. Speaking at a House Leadership press conference in Washington D.C. this morning, Ryan said that viewpoint does not represent conservatism. “What was proposed yesterday is not what this party stands for and, more importantly, it’s not what this country stands for,” Ryan said.

Ryan did not mention Trump by name in his comments.

The Janesville Republican noted that soldiers in the U.S. military, members of Congress, and many of the nation’s allies in the fight against radical Islamic terrorism are in fact Muslims. “The vast, vast, vast, vast majority of whom are peaceful.”

Trump has continued to stand by his remarks, despite a firestorm of criticism from within his own party.