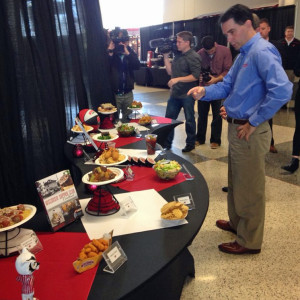 Just in time for Saturday’s match-up with the Marquette Golden Eagles, there’s something new for Badger fans at the Kohl Center in Madison. It’s a new concession stand based on a state icon – the supper club. “Food is a big driver of tourism and this is a fun way to get our tourism message and brand in front of a highly qualified audience of potential travelers. They have been a tradition for about 100 years,” said state tourism Secretary Stephanie Klett, who was joined by Governor Scott Walker and another Wisconsin icon – Badger mens’ basketball coach Bo Ryan – to unveil the Travel Wisconsin Super club concession stand.

“Hopefully we can have another great year in the tourism industry, and with the energy we have in this place right now, I think that’s a definite,” said Ryan, who’s been featured in Wisconsin Tourism television ads.