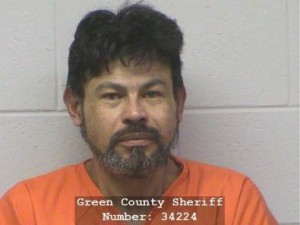 Three people are facing multiple felony charges in connection with a methamphetamine operation in Green County. Multiple law enforcement agencies served a warrant on Monday at a rural Town of Cadiz residence. Officers seized more than 400 “shake and bake” bottles used in the manufacture of methamphetamine.

Arrested were 26-year-old Anthony Herrera, 50-year-old Jose Orellana, and 21-year-old Alexandra Orellana, 21. Each was tentatively charged with manufacturing methamphetamine and possession and disposal of methamphetamine waste. Herrera also was tentatively charged with maintaining a drug house, according to a press release from the Green County Sheriff’s Office.

The search of the residence and property was conducted by the State Line Area Narcotics Team along with local deputies and agents from the Wisconsin Division of Criminal Investigation and the Drug Enforcement Administration. It’s the second such occasion that a clandestine meth manufacturing operation was shut down in Green County in December, according to the sheriff’s department.