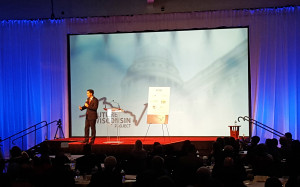 Governor Scott Walker is dropping some hints about a possible run for a third term in office.

Following the unexpected end to his presidential campaign earlier this fall, Walker has remained relatively quiet about his political future. During a speech in Madison Wednesday, the governor indicated planning for the state’s future may include thinking about his own.

Speaking to the crowd at the Wisconsin Manufacturers and Commerce “Wisconsin Future” economic summit, the governor said there are many challenges facing the state that need to be planned for, which he is working to do in this term, and “God willing, if in the future as voters, you ask me to continue to stay on for four more years after that.”

Walker ended his address by saying that he’s committed to planning for the future of the state “through the remainder of my term, and whatever terms I’m blessed to serve thereafter.”

Walker’s current term runs through 2018. The governor did not take questions from the media following his speech at the event.