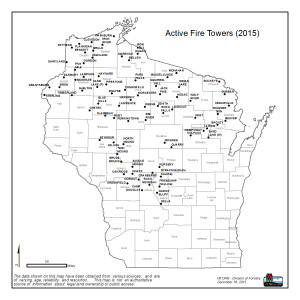 A map of currently active fire towers in WI.

The state Department of Natural Resources plans to stop using dozens of towers to help spot wildfires in Wisconsin.

Many of the 72 towers used by the state were built in the 1930s. Bureau of Forest Protection director Trent Marty said they have served the state well, but they’re getting old and the upkeep costs are rising. “Due to the age and condition of the infrastructure, we evaluated the costs of replacing the towers, and it came to a figure of about $25 million,” he said.

Most of the towers are located in northern Wisconsin, where Marty said conditions have changed so much that they are not really needed anymore. “With the advent of cell phones, citizen reporting has greatly improved,” he says, also noting that the population of the region has risen since the towers were first built.

The state will shift the funds for operating the towers to an aerial survey program, while also relying more heavily on reports from the public.

Many of the towers are located on private land, with easements granted to the DNR. Marty said they will begin working with property owners early next year to determine whether towers will be removed or allowed to remain standing.