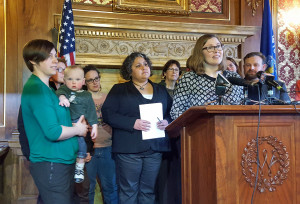 A bill introduced at the Capitol on Monday calls for adding gender neutral language in numerous state marriage laws with gender-neutral language, such as changing “husband and wife” to “spouse.”

Rep. Mark Spreitzer (D-Beloit) said it will help prevent legal complications on issues ranging from property to parental rights, which currently can force them to head to court. “It is wholly unfair that same sex couples are forced to pay significant costs associated with legal action to get a declaration of their rights…especially rights involving their children,” the Beloit Democrat argued during a news conference in Madison.

Rep. JoCasta Zamarripa (D-Milwaukee) said the changes will make it clear that all couples have rights and are welcome in Wisconsin. “Making all references to husband or wife gender neutral will guarantee all married couples in Wisconsin equally enjoy the benefits of that institution,” she said.

Lawmakers were joined by several same sex couples, many of whom have children. Jamie Gaffke of Beloit said she and her wife, Ruth Vater, had to go to court just weeks after the birth of their son so they could establish parental rights. “In order to protect the security of our family, we spent thousands of dollars. Thousands of dollars that could have gone into our son’s education fund, maintenance to our house, any number of other things…we spent that money, and that time, and that stress, and that effort to secure Ruth’s legal parental rights.”

The bill is being circulated for co-sponsors at the Capitol. It remains clear whether it will have the Republican support likely needed to get a vote this session.