You are here: Home / Crime / Courts / Wisconsin officials ask ‘if you see something, say something’ 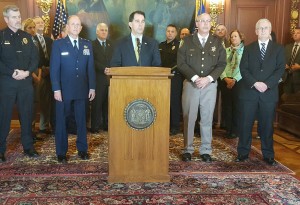 With fears of terrorism on the rise after last month’s attacks in Paris and the recent mass shooting in San Bernardino, California, state law enforcement and military officials are reviving a campaign that asks people to report suspicious activity.

The “If you see something, say something” campaign encourages the public to keep a watchful eye for activity that could be linked to criminal or terrorist intentions, and to report it to authorities. Adjutant General Don Dunbar, the state’s Homeland Security Advisor, says people see stuff all the time that may not seem right, but don’t speak up. “When you do the after-action report, and the professionals have a chance to unpack it, you almost always find somebody -a friend, a family member, a neighbor – who saw something and didn’t say anything about it.”

Wisconsin Chiefs of Police Association President Dave Funkhouser says it’s an important step for the public to take, noting that a citizen report about a suspicious vehicle in his community of Kiel helped identify four people tied to a burglary, who were also involved in the sales of narcotics and weapons.

Iowa County Sheriff Steve Michek says people should “have the character to risk being wrong,” because there’s a good chance they will not be.

If they see something suspicious, the public is urged to contact local law enforcement, or to call a state hotline set up several years ago at 1-877-WI-WATCH.