You are here: Home / Packers / Adams likely out of divisional playoff game 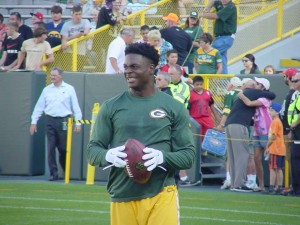 Just when Davante Adams appeared to be coming out of his season long slump, the Green Bay Packers are expected to be without the wide receiver for Saturday night’s NFC divisional playoff game against the Arizona Cardinals.

Adams was injured in Sunday’s NFC wild-card game victory over the Washington Redskins.  He left the game in the second half and didn’t return.

An initial test showed Adams avoided a major injury, but further tests on his knee back in Green Bay showed a possible MCL sprain.

MCL injuries typically don’t require surgery, but it’s not certain how severe the sprain is.

Mike McCarthy refused to comment on Adams status, as well as the status of any other injured player until at least Wednesday when the Packers hit the practice field.  But it would appear Adams could miss at least Saturday’s game at Arizona.