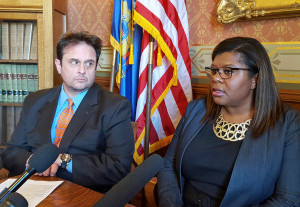 The state Assembly has approved a bill aimed at improving the treatment of disabled children who are the victims of abuse or neglect.

State Representative Joel Kleefisch (R-Oconomowoc) says how local agencies currently approach those cases varies widely, with some children facing an “uneven playing field” when they are the victims of a crime. “Very often…people with disabilities who are the victims end up not having their perpetrator taken to trial, because they are not prepared as good witnesses…these crimes are often not charged,” he says.

State Representative LaTonya Johnson (D-Milwaukee), a co-sponsor of the measure, says many victims currently fall through the cracks because of their disabilities. “Numerous children with non-verbal skills are seeing enormous abuse.”

The bill requires the Department of Children and Families to develop a model procedure for investigating reports involving children with a cognitive disability. Those procedure would include identifying the specific disability of a child, making sure local agencies comply with the Americans with Disabilities Act, and developing strategies for interviewing victims of abuse or neglect.

The proposal passed the Assembly Tuesday on a voice vote and now heads to the state Senate.