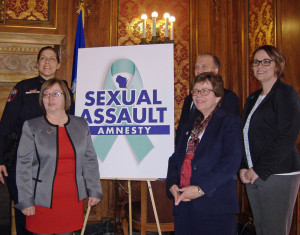 Legislation being proposed at the Capitol provides “ticket amnesty” for underage drinkers who report sexual assaults on UW campuses. With sexual assault remaining the most under reported crime, Attorney General Brad Schimel backs the legislation.

“This crime goes under reported because there’s so many psychological and emotional dynamics that go into it,” Schimel said. “Removing this barrier is an important piece to giving victims confidence that they’ll find a system that’s ready to listen to them.”

“We have been telling them that if you are drinking but helping a freind, we will focus on the sexual assault issue, and not on the drinking issue,” Blank said. “This (not issing tickets for underage drinking) is understood to be the process across most jurisdictions of Wisconsin,” said the bill’s author, state Representative Joan Balweg (R-Markesan). “But by doing this particular legislation, we’re making sure thart we have the force of law, to make sure that there will not be any citations in those kinds of situations.”

Balweg and Senator Fred Risser (D-Madison) offered more broadly written legislation in 2013, which would have taken tickets off the table for UW System students who sought help for dangerously intoxicated friends. That bill failed to advance. Schimel said this more narrowly focused legislation is is needed due the under reported nature of sexual assault.