You are here: Home / News / Board reverses change to Wisconsin transitory records policy 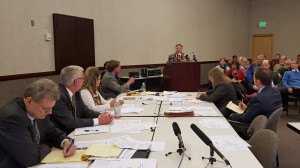 A state board has reversed a controversial change to state regulations on how long public officials have to hold on to certain types of records.

The state Public Records Board on Monday voted unanimously to vacate its August update to a policy covering so-called transitory records. The rules are intended to provide guidance to public officials on the retention of records with limited historical value, but the decision was cited by Governor Scott Walker’s administration to deny requests for information such as visitor’s logs to the executive residence and a text message from a state official regarding a controversial state loan.

Board member Carl Buesing maintained that was not the intent of their actions last year and took issue with claims that the board had made the change to benefit Republicans. “To suggest in any fashion whatsoever that we are limiting access to text messages, emails, Facebook posts, or other electronic communications is completely incorrect,” he said.

The board’s August 24 action came just a day before the first time the Walker administration cited it in denying an open records request, although Buesing questioned whether the two were actually linked. Wisconsin Freedom of Information Council president Bill Leuders said members seemed to have been missing the point. “Whether it was their intention to change the law in the way that allowed people to destroy records or not, that is what’s happened,” he said. “When they destroy these records, they’ve been citing the Public Records Board’s definition of transitory records as giving them the authority to do so.”

The Council filed a lawsuit challenging the rules changes, citing concerns that they were approved last August with improper public notice. The board decided to revisit the issue because of those concerns, vacating its previous vote and re-approving a number of other records retention rules updates. The board did not act on a revised policy for transitory records though, leaving a version approved in 2010 in place for the time being. Chairman Mark Blessing said they would likely address it in the future.