You are here: Home / Sports / Bucks hold off Pacers for road victory 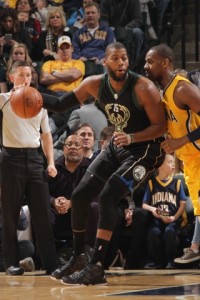 The Milwaukee Bucks controlled most of the game, then held off a furious Indiana rally in the final minutes to pull out a 120-116 win over the Pacers on Thursday night at Bankers Life Fieldhouse.

Trailing by double digits, the Pacers used a full-court press to close the gap in the final four minutes, but the rally fell short.

Khris Middleton led six Bucks in double figures with 33 points, helping snap a 3-game losing streak.  The Bucks (13-21) shot 58% from the field (45 of 77), winning on the road for just the fourth time this season.

The Bucks avenged their biggest loss of the season, a 123-86 setback against the Pacers in November.

The Bucks will wrap up their four-game road trip at Minnesota on Saturday.