You are here: Home / Fires/Accidents/Disasters / Buggy driver killed in crash with truck in Clark County 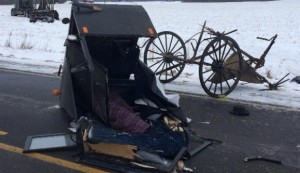 One person is dead and another was injured after their horse-drawn buggy was hit by a truck in Clark County.

Clark County Sheriff Gregory Herrick said 50-year-old Aaron Newswanger of rural Dorchester was driving the buggy along the side of a county highway Thursday, when the horse pulling it got spooked and abruptly turned in front a of an oncoming logging truck. Herrick said the driver of the truck tried to swerve to avoid a collision, but struck the buggy as he was entering the ditch.

Newswanger and his passenger, 49-year-old Esther Newswanger, were both thrown from the buggy. Aaron was pronounced dead at the scene and Esther was flown to a Marshfield hospital with incapacitating injuries. The horse pulling the buggy was also killed.

The two people in the logging truck were not injured.