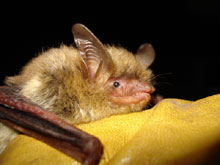 While the process is likely far from over, the U.S. Fish and Wildlife Service has posted final rules to help preserve the nation’s long-eared bat population.

Under the final rule, intentionally harming, harassing or killing the northern long-eared bat is prohibited throughout the species’ range – except for removing them from human structures, and when necessary to protect human health and safety.

Logging operations will also have to pay more attention to where they operate, with cutting limited to within a 150 foot radius of trees where the bats are nesting. Great Lakes Timber Professionals Executive Director Henry Schienebeck says it’s a rational restriction, and makes more sense than the initial quarter-mile radius than had been proposed. “All the science pointed to that…150 feet is something we can work with,” he says.

The species is threatened by White Nose Syndrome, a fungus that has killed bats by the millions and has been found in 30 states. The federal government is also stepping up efforts to stop the illness caused by fungus, with about $45 million being dedicated towards finding a cure.