You are here: Home / Badgers / Koch named AHCA Assistant Coach of the Year 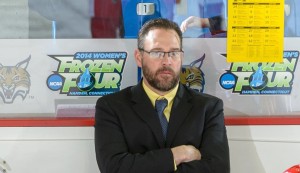 Dan Koch – Photo: U of Wisconsin

The Madison native is in his fifth season as the Badgers’ associate head coach after serving eight years as an assistant coach, amassing a 365-81-35 (.795) record behind the bench.  Koch has assisted the Badgers to seven NCAA Frozen Fours and saw the team win three of their four national titles.

Koch oversees the stingy UW defense, which has ranked among the top-three teams nationally for scoring defense in 11 of his 12 seasons with the Badgers.  That includes the 2006-07 squad that set the NCAA record with 0.88 goals-against average.  His defensemen have led the NCAA in scoring defense in three different seasons.

This season, Koch helped the Badgers set the NCAA men’s and women’s shutout record, tallying nine-consecutive shutouts that spanned over 624 minutes between October 3 and November 14.  The Badgers have recorded shutouts in 12 of their 22 games this season and have a goals-against average of 0.64 to pace the country.

Koch also plays a part in the team’s penalty kill, which has led the NCAA four of his 12 seasons.  Last year, the UW penalty kill set the NCAA record with a .958 clip.