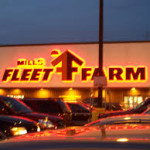 Mills Fleet Farm has been sold to New York-based KKR, one of the country’s largest investment firms. Fleet Farm, based in Brainerd, Minnesota, has 35 retail stores in Minnesota, Wisconsin, Iowa and North Dakota. The retailer employs around 6,000 people.

In October Fleet Farm officials announced the company was for sale, saying they’ve reached a point where, in order to grow at a speed to be competitive, it needed to look for outside sources for capital.

Terms of the deal were expected to be announced later on Tuesday.