You are here: Home / Badgers / Nurse named WCHA Offensive Player of the Week 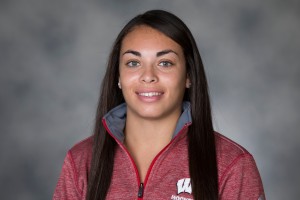 After a four-point weekend at home against Minnesota-Duluth last weekend, Wisconsin women’s hockey standout Sarah Nurse has been named the WCHA Offensive Player of the Week.

Nurse earned her first weekly accolade of her career after scoring three goals and an assist during the team’s sweep of Minnesota-Duluth.

Nurse leads all Badgers and is tied for third nationally with four game-winning goals.  She ranks second on the team with 24 points from 15 goals and nine assists, and ranks seventh in the nation for goals per game, averaging 0.83 goals per contest.

The second-ranked Badgers travel to face 6th-ranked Bemidji State.  Both Friday and Saturday’s games at the Sanford Center are set for 2 p.m. starts.