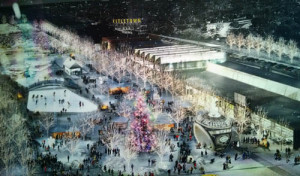 The Village of Ashwaubenon has released a public notice detailing an upcoming neighborhood public open house meeting about the multi-million dollar Titletown District.

The Green Bay Packers organization has submitted an application to the village for a Planned Unit Development (PUD).

The Packers will have a “short presentation to describe the project, the uses proposed for the site, traffic and circulation elements and the initial conceptual design of the buildings and public spaces” on Thursday, January 21 at 6 p.m. at the Ashwaubenon High School Auditorium.

Team officials will then be available after the meeting to answer questions and talk to the public.

Back in August, the Packers unveiled plans for the 34 acres of landed, bordered by Lombardi, Ridge, Brookwood and Marlee Lane, to create a year-round district to attract visitors.

The plans included a large public plaza, featuring an ice skating rink in the winter, a high end Kohler hotel, a Bellin Health Center and Hinterland Brewery and restaurant. There are also plans for high-end townhomes.

WATCH: Take a video tour of the Titletown District