You are here: Home / Packers / Packers fall short of their goal, again! 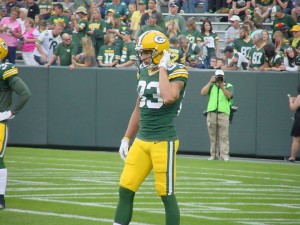 But the Packers lost the coin toss and would their defense to hold Arizona to a field goal at the very least, to get an opportunity with the ball.

The Cardinals got after the Packers immediately.  Carson Palmer eluded some Packers pressure and found veteran Larry Fitzgerald.  Mike McCarthy said it was a broken coverage.  Seventy-five yards later and the Cardinals had the ball first and goal at the five.  Two plays later and it was Fitzgerald again, on a 5-yard shuffle pass from Palmer, scoring the game winning touchdown, not giving  the Packers a chance with the football.

It means the Packers’ season ended for the second straight season on the first possession of overtime.  Last year, Seattle beat the Packers 28-22, on a 35-yard touchdown pass from Russell Wilson to Jermaine Kearse.

The Packers lost wide receiver Randall Cobb with a chest injury late in the first quarter.  That injury loss meant the Packers had just three wide receivers left for the game.

With the production of those two players, it’ll be interesting to see just how the Packers address the wide receiver position in the offseason.

The offensive line allowed just one quarterback sack on Saturday night, after giving up nine sacks in the 38-8 regular season loss to the Cardinals.  But the Packers had a hard time running the football.

The Packers finished the season 11-7 and Mike McCarthy’s teams have won two playoff games in a year just once.  They won the Super Bowl that year (2010).

The Cardinals improved to 14-3, advancing to the NFC Championship game against the Carolina Panthers next Sunday.

Five of Mike McCarthy’s playoff defeats have occurred on the games final play as they continue to under-perform in the postseason.

Mike McCarthy and Ted Thompson will have to figure out who is to blame for the shortcomings over the last several years.  What players will return and which players won’t be back.  What coaching changes must be made, if any.  And McCarthy and Thompson must look in the mirror and shoulder some of the blame.

Aaron Rodgers likely still has several years left, but the Packers are wasting chances with a top quarterback in their camp.  They need to take advantage while they can.

Players will go through exit interviews on Monday before heading into the offseason.

AUDIO: Mike McCarthy felt they had enough to win it all :15