You are here: Home / Packers / Packers get offense going just in time (AUDIO) 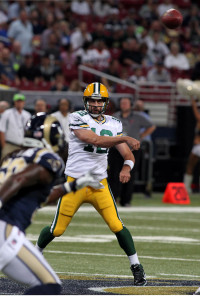 The Green Bay Packers fell behind 11-0 in Sunday’s wildcard playoff game at Washington and it looked like they were headed to a first round defeat at FedEx Field.

But this time, Aaron Rodgers was able to bounce back, rally the troops and with a strong defensive showing, cruised to a 35-18 win over the Redskins.

The Packers were so good, they scored on five straight possessions, four touchdowns and a field goal over the final three possessions of the first half and first two of the second half.  By the time the smoke settled, the game was technically over and Redskins fans were headed home early.

The Packers gave the start at left tackle to J.C. Tretter and things got off to a slow start.  He had given up a 5-yard sack and safety to put the Redskins on the board.  But as the Packers got better, so did Tretter.

The Packers were also able to be balanced on offense.  They ran it 32 times and passed it 36 times.  They finished with 141 rushing yards and were able to put the game on ice with the ground game in the second half.

Defensively, the Packers were able to pressure Kirk Cousins, getting 13 quarterback hits and six quarterback sacks.  Mike Neal had two sacks, one of which led to a forced fumble and a fumble recovery on Cousins.

Tight end Jordan Reed was able to do some damage on the Packers, but the secondary was able to keep the rest of the Redskins receivers in check.

So now the 5th-seeded Packers (11-6) advance to a divisional playoff game on Saturday night at 7:15 in Glendale, Arizona, against the second-seeded Arizona Cardinals (13-3).  Arizona crushed the Packers 38-8 on that very same field just two weeks ago.

Did the Packers find themselves in time to make a deep playoff run, or did they play a good game against an opponent that won a weak division (NFC East) and just wasn’t up to par?

Time will tell, but the Packers have said all along that the regular season is behind them and this is a new season, one in which you win or go home.

The Packers continue to be banged up, while the Cardinals were able to get a week of rest.  Will the Packers be good enough to march into Arizona and steal one?  They’ll be underdogs but the Packers are good at using the us-against-the-world mentality and you can bet Mike McCarthy will have them in that mode come Saturday night at 7:15.

AUDIO: Aaron Rodgers on the difference in offensive execution :23

AUDIO: Mike McCarthy on the ability to run and pass :20