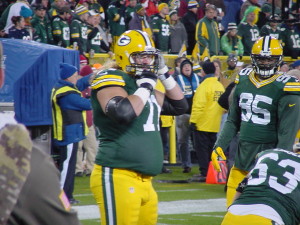 Playing for the NFC North Division title on Sunday night at Lambeau Field, Packers coach Mike McCarthy decided to shake things up on offense.  Unfortunately for the Green Bay Packers, the results were the same and the Minnesota Vikings came away with a 20-13 victory and their first NFC North title since 2009.

With David Bakhtiari sidelined for the second straight week with an ankle injury, McCarthy decided to move Pro Bowl left guard Josh Sitton out to left tackle, a position he hasn’t played since high school.  The Packers went with Lane Taylor at left guard in Sitton’s vacated spot.

McCarthy’s game plan was to run the ball.  He started the game using double-tight ends and either two backs and a single receiver or one back and two receivers.

The Packers managed just 76 yards on 26 carries, a 2.9 yard per carry average.

AUDIO: Mike McCarthy on getting nothing out of their attempt to run the ball :13

The Packers managed a 28-yard field goal from Mason Crosby in the first half.  The Vikings built a 20-3 lead in the second half and the Packers wound up abandoning their ground attack in favor of opening up the passing game.

The Packers scored 10-points in the fourth quarter to close the gap, but their late rally would fall short.

Aaron Rodgers completed 28 of 44 passes for 291 yards with a touchdown and an interception.

The Packers move into the wildcard playoffs this Sunday afternoon with a game against the NFC East Division Champion Washington Redskins (3:40 pm kickoff).

The last time the Packers entered the post-season as a 10-6 Wildcard team was 2010 and they won the Super Bowl that year.  But the comparison’s stop there.  In 2010, the Packers carried a two-game win streak into the post season.  This time around, the Packers have lost two straight and have not been able to solve the major offensive funk that they’re in.

Quarterback Aaron Rodgers said he’s encouraged by the way they moved the ball in the fourth quarter as they get ready to face the Redskins.

The loss to the Vikings means the Packers were swept at home this season by their NFC North foes.  The last time that happened was back in 1968.

The win is the first for Vikings head coach Mike Zimmer against the Packers.  Mike McCarthy has to quickly turn the page and get his team ready for Sunday’s wildcard playoff game against the Redskins.

AUDIO: Mike McCarthy on the loss :21

AUDIO: Aaron Rodgers says they haven’t been able to put a full game together :23