You are here: Home / Packers / Packers would like to return Clay Matthews to OLB 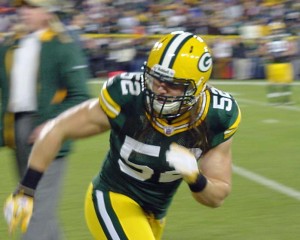 Green Bay Packers linebacker Clay Matthews has always been about the team.  Asked to move to inside linebacker fulltime meant giving up his real love of sacking the quarterback.  But the team called and Matthews did what was best for the team.

The former USC standout got some good news on Monday when Mike McCarthy, at his season ending press conference, said it is his goal to play Matthews primarily at outside linebacker in 2016.

“We’re obviously a lot better with him playing the outside position,” McCarthy said Monday. “He’s an outside linebacker, and we need to get back to him playing there.”

Last year, Packers general manager Ted Thompson didn’t address the middle linebacker position until the fourth round of the draft, selecting Jake Ryan out of Michigan.  That pretty much ensured that Matthews would be asked to play the bulk of his snaps on the inside, which is what happened.

If the Packers are going to have the luxury of moving Matthews back outside, they’ll likely need to address it in the draft again, or sign a free agent.  It is also possible the Packers could decide that Ryan, along with Sam Barrington, will be able to pull it off.  Barrington was lost this past season after just one game with a broken foot.

Matthews played less than 40% of the snaps on the outside this past season, posting a sack total of 6.5 during the regular season.  That is the second lowest total of Matthews career.

McCarthy didn’t rule out having Matthews play some at inside linebacker, but not nearly as much as he did this year.

AUDIO: McCarthy says they need to get Matthews back outside :13