You are here: Home / Packers / Peppers added to Pro Bowl 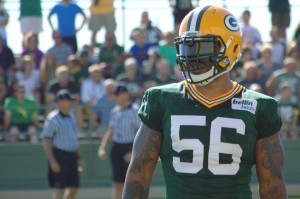 Green Bay Packers linebacker Julius Peppers has been added to the Pro Bowl roster on Monday.  Peppers replaces Denver Broncos linebacker Von Miller, who is unable to participate due to advancing to the Super Bowl.

With 136 career sacks, Peppers is tied with Jared Allen for the most sacks among active players (136) and the ninth most in NFL history (since 1982).

Joining Peppers on the Pro Bowl squad is Clay Matthews, Josh Sitton and John Kuhn.  Aaron Rodgers was voted to the team but pulled out because of injury.