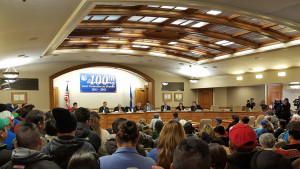 Lawmakers heard hours of testimony Wednesday on a proposal that would ban local governments from enacting so-called “sanctuary city” policies.

Such policies prohibit law enforcement from working with immigration officials or from asking about the citizenship status of someone they come in contact with. Under a proposed amendment, the legislation would only prohibit policies dealing with making those inquiries to individuals charged with a crime.

State Representative John Spiros (R-Marshfield), the sponsor of the bill, says it’s designed to make sure those in the country illegally are dealt with properly and not released on the streets to put others in danger. “As a former law enforcement officer myself, I believe this legislation is needed to protect the safety of all residents in Wisconsin,” he said.

The bill was inspired by a case in California, where a suspect was released despite a federal immigration hold request and went on to fatally shoot a woman. Spiros testified that he’s not aware of any situations in Wisconsin where local policies on immigration inquiries have resulted in a crime being committed.

Spiros says Madison, Milwaukee, and Racine have policies that make them sanctuary cities, although those communities contend they comply with federal immigration laws.

Hundreds turned out to oppose the measure during Wednesday’s hearing, resulting in a standing room only crowd that spilled out into the hallways. Common Council member Shiva Bidar-Sielaff, an immigrant herself, was among many who spoke up against the proposal. She argued that it “sends a message of fear” to immigrant communities, which will discourage residents from reporting a crime out of concern that contact with police will make them a target.

Bidar-Sielaff added that it sends another message as well to “people that are contributing to our communities every day…that we’re not welcome in our state.”