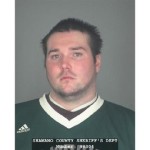 Shawano Police say events that led to an exchange of gunfire in the city Monday night began as an altercation at a local bar. Police were called to Hensels bar on South Washington Street for a group of people that were fighting. Investigators says the subjects left the bar, and 23-year-old Tony Brunker returned in a green truck to the Richmond Street area with a Highpoint 9mm rifle.

Officers say shots were fired by Brunker towards the group on the sidewalk, and return fire came from a person who possessed a concealed carry license. Police say bullets hit the truck and the home at 615 West Richmond Street, but they have not determined who fired first.

“We haven’t determined yet who fired their guns first,” said Police Chief Mark Kohl. Kohl said investigators are still sorting through Monday night’s exchange of gunfire — including whether or not either shooter was acting in self-defence. “We have to fully investigate it, and let the facts speak for themselves, and then we’ll present that report to the Shawano County district attorney, and they will determine what they can prove and who should be charged out.”
Brunker was taken into custody for reckless endangerment and possession of marijuana, and other suspects may be charged at a later time.