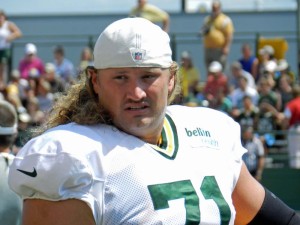 Green Bay Packers offensive lineman Josh Sitton may have struggled at left tackle last week, but he remains one of the top guards in all of professional football.

Sitton was named to the Associated Press All-Pro Second Team on Friday.  He was the only member of the Packers team selected to the squad.

Earlier this season, Sitton saw his streak of consecutive games without allowing a sack end at 37.  Prior to that, Sitton’s last sack allowed was in Week 17 of the 2012 season.

Sitton has allowed five sacks this season, but two of the five came while playing left tackle last week against the Vikings.  He hadn’t played left tackle previously since high school.

This is the third straight All-Pro second team honor for the Packers guard.