You are here: Home / News / Slow start for Wisconsin snowmobilers 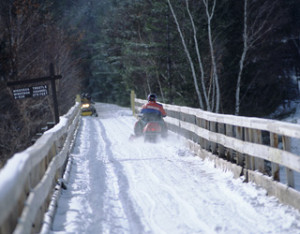 Snowmobiles are normally buzzing through Wisconsin as we head into February – but not this year. Only about two dozen of the state’s 72 counties have all their trails open, thanks to a lack of snow in most areas this month.

Much of the southeastern third of Wisconsin got between 4-6 inches Tuesday. Other than that though, snowfalls have been sparse since a storm around Christmas dumped up to 14-inches in parts of the state.

According to the state Department of Tourism, most counties between Manitowoc and Richland Center have all of their snowmobile trails open with fair-to-good conditions. The same is true in 17 counties in the northern third of the state, with Iron County the only one reporting excellent conditions.

Snow depths east of Wausau are only 5-8 inches, even though the region normally gets more than a foot of snow in January alone.