You are here: Home / Packers / Super Bowl I will re-air on the NFL Network after game pieces clipped together (VIDEO) 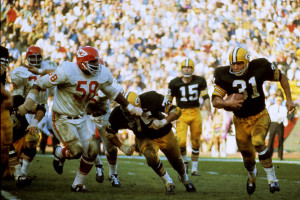 The NFL Network will air “Super Bowl I: The Lost Game” at 7 p.m. on Friday, which falls on the 49th anniversary of the game, which the Chiefs lost 35-10 to the Green Bay Packers.

It was long believed the broadcast, or at least the entire broadcast never existed, but NFL Films searched its archive and found video of all 145 plays from Super Bowl I.  They put the plays in order, remastered and matched audio from the NBC radio broadcast.

Here’s a trailer released by the NFL.

(Thanks to Bill Pollock at Missourinet for this story)