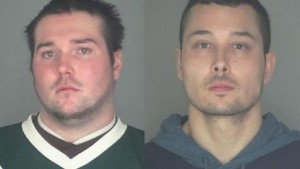 Both men were due to make their initial court appearance Friday afternoon.

Police say the conflict began at a downtown bar, when Brunker and several people got into an exchange. Brunker’s rear window of his pickup truck got broken out at that time.

Later that evening, Brunker drove past a home on Richmond Street, when he and Thomas shot at each other. Police say Thomas admitted to shooting first.  No one was injured.