You are here: Home / Crime / Courts / Vigil held in Beloit for boy killed in shooting 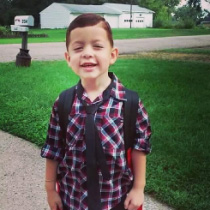 Residents of Beloit came together Sunday night to pay their respects to Austin Ramos Jr., the five-year-old killed last Friday night after he was hit by gunfire while riding in his father’s car.

Dozens of people turned out for the candlelight vigil, including community leaders and family of the victim. Luis Pineda, one of Austin’s cousins, called the whole incident hard to believe. “I couldn’t fathom anyone shooting a child and taking a life….now there’s any empty bed and empty heart because of this senseless violence.”

Pineda said the violence is something that will affect his family for the rest of their lives. “When you see someone’s smile and their laughter and the beauty they cause in a room and all the hearts they can fill,” he says. “The beauty of a child, to be taken, that’s ridiculous. It’s just not something any family anywhere should go through.”

Police continue to search for a maroon SUV that had been following the father’s vehicle just before the shots were fired. Austin’s father was not hurt and has been cooperating with the investigation.