You are here: Home / News / Vos: No open records changes this session 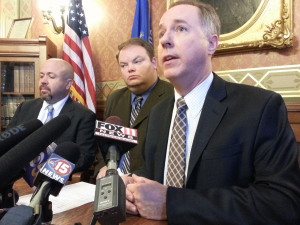 As lawmakers return to the Capitol this week to begin the final months of the legislative session, a top Republican in the state Assembly says there are no plans to explore possible changes to Wisconsin’s open records laws before they head home for the year.

GOP leaders faced heavy criticism last summer after last minute changes were slipped into the state budget that would have greatly limited public access to legislative records, including who may be influencing the drafting of bills. Lawmakers removed the provision following a massive public outcry, and Speaker Robin Vos (R-Rochester) said it’s not something he plans to revisit soon. “We are not going to do anything this session,” Vos said in an interview with WRN.

The Rochester Republican was among those behind the changes proposed last summer, which supporters have argued were needed to help safeguard the free exchange of ideas when crafting legislation. He still disagrees with those who say Wisconsin’s law should remain unchanged, citing a long list of modern factors that were not in play when it was written in the 1970s. “There were no cell phones, there wasn’t a computer that you send email with, there wasn’t voice mail,” he noted.

Those issues are a factor in an ongoing dispute involving the state’s Public Records Board, which made a ruling last summer dealing with communications like text messages that it deemed “transitory.” That decision has prompted backlash from open records advocates who contend any communications discussing government business that produce a record are subject to the state’s open records laws. The board has since agreed to revisit the decision at a meeting later this month.

Vos said the dispute highlights the need to address some of those ongoing uncertainties, such as how long lawmakers need to retain the many messages they receive. “Does anybody keep every single text message they’ve ever sent? I don’t…you just don’t, so how can you do something from six months ago on every text message you ever had? That’s a very difficult world that we’re living in, without clearly defining exactly what a record is.”

Vos said there needs needs to be an adequate way to have an accountable open government, while preserving the original intent of legislative communications and keeping someone from “reading into somebody’s emails something that was sent months and months ago.”