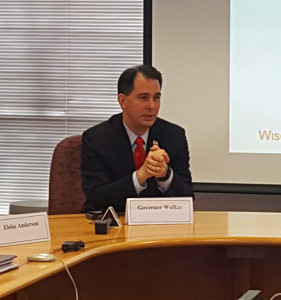 The governor is offering praise to federal officials for disrupting a plot to carry out a mass shooting in Milwaukee.

The FBI arrested 23-year-old Samy Hamzeh this week after he bought machine guns and a silencer from undercover agents, which prosecutors claim he planned to use to carry out an attack on a Masonic Temple in Milwaukee.

During a stop in Madison Wednesday, Governor Scott Walker said he’s thankful federal officials were on top of threat. “I just think about things like that and, I’ve got to tell you more than just as governor, but as a father, it shakes me up a little bit,” Walker said.

Hamzeh had been the target of a federal investigation since September, after he allegedly planned to travel to Israel to attack soldiers and citizens. Prosecutors say he later abandoned those plans in order to focus on the domestic attack.