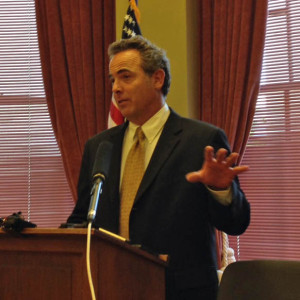 A Democratic state lawmaker says he hopes to address a growing crisis facing the Wisconsin’s prison system, which he argues have been struggling to fill vacant jobs for new corrections officers.

Senator Jon Erpenbach (D-Middleton) says many people who once considered a career in corrections are changing their minds because of current working conditions, which he describes as being understaffed and potentially dangerou. He says a lack of training and excessive overtime are taking their toll, with some prisons seeing position vacancy rates as high as 20 percent.

The Middleton Democrat has introduced a package of nine bills that seek to address the issue. They include proposals that would put limits on consecutive overtime shifts, allow workers to once again collectively bargain over workplace safety issues, and require more on the job training for new guards in the system.

“Until Governor Walker and the Republican majority see this crisis for what it is and commit to change, we will continue to see dangerous assaults inside our institutions. We know there are not enough people to adequately staff our facilities, we should not pretend this will change without action,” Erpenbach argued during stops around the state this week to unveil the proposals.

The state Department of Corrections did not respond to a request for comment on the proposals.

Rick Schuh at affiliate WHBY contributed to this report.