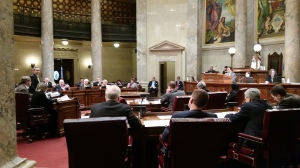 Legislation designed to help fight heroin abuse in Wisconsin is on its way to Governor Scott Walker for his signature, following final approval in the state Senate on Wednesday.

The four bills from state Rep. John Nygren (R-Marinette) are intended to help crackdown on prescription drug abuse, a common gateway for heroin addiction. They are the latest step in Nygren’s HOPE agenda, inspired by his own daughter’s struggles with heroin addiction. Each passed the Senate on a voice vote, after receiving similar approval in the Assembly last week.

The bills require pain and methadone clinics to register with the state, and report the number of patients they treat. The others create a statewide database for doctors to report opiate prescriptions and have police report information about prescription drug thefts.