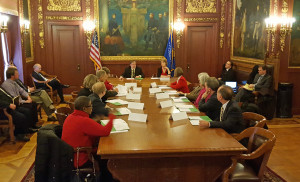 A bipartisan panel has set the slate of candidates whose names will appear on Wisconsin’s presidential primary ballot in April.

The names were selected by a group of Democratic and Republican leaders who gathered at the Capitol Tuesday afternoon. The groups consisted largely of party and legislative leaders.

Government Accountability Board director Kevin Kennedy said Wisconsin’s process sets the candidates based on those who are generally recognized by the national media. If a candidate failed to be included, they have the ability to petition for their inclusion until January 26. Kennedy noted the threshold to make it on the ballot that way is high – requiring 1,000 signatures from each of the state’s eight Congressional districts.

If no additional names are added, the approved candidates will be placed on the ballot using a random process after the January 26 deadline has passed. If a candidate drops out of the race after that point, they will still appear on the ballot during the primary.