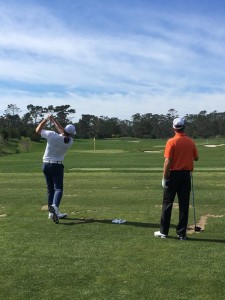 Aaron Rodgers’ recovery from knee surgery in January is going so well that he’s taking part this week in the PGA Tour’s AT&T Pebble Beach Pro-Am.

Rodgers was moving around without any kind of limp at the NFL Honors program last Saturday night.  Now he’s going to tee it up this week with Madison’s Jerry Kelly, who is a three-time winner on the PGA Tour.

Rodgers has played in the Pebble Beach Pro-Am several times.  He and Kelly will tee off on Spyglass Hill on Thursday morning.  It’s one of three courses used for the event, which features 156 PGA professionals, with each of them paired with an amateur partner.