You are here: Home / Badgers / Bo Ryan named a finalist for 2016 Hall of Fame class 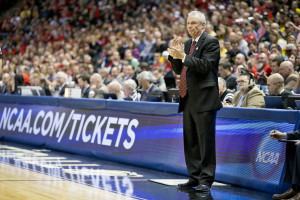 After falling just short of induction last year, former Wisconsin coach Bo Ryan has once again been named a finalist for the Naismith Memorial Basketball Hall of Fame.  Ryan was named one of 14 finalists for the 2016 class on Friday.

The 68-year-old Ryan led the Badgers to the Final Four each of the last two seasons, including an appearance in the title game last year.  The Badgers fell short, losing to Duke 68-63 in the championship game, finishing with a 36-and-four record.

The Badgers under Ryan never missed the NCAA tournament and won four Big Ten Conference regular-season titles and three Big Ten tournament titles.  When he retired in December, he left with a record of 747-233 in 32 seasons of coaching.  That included a 364-130 mark in 14-plus seasons at UW.

The 2016 Hall of Fame Class is to be announced on April 4 in Houston before the N-C-A-A Championship game.