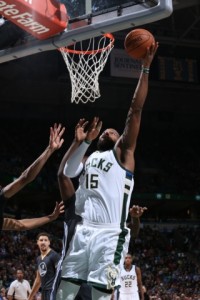 The Milwaukee Bucks saw their five-game losing streak come to an end, knocking off the red-hot Boston Celtics 112-111 at the BMO Harris Bradley Center on Tuesday night.

Bucks coach Jason Kidd decided to shake things up by shuffling his starting lineup.  Miles Plumlee and O-J Mayo were both moved to the starting lineup while Greg Monroe and Michael Carter-Williams played off the bench.

It was the first time this season that Monroe didn’t start, but he responded with a season high 29 points and 12 rebounds.

Khris Middleton added 20 points, including the game-winning free throw with less than a second to play in the game to win it for the Bucks.  Carter-Williams added 16 points, hitting six of his eight field goals and played some stellar defense as well.  He also added six rebounds and five assists in 26 minutes.

The Bucks trailed the Celtics by one-point at halftime but outscored Boston, 40-to-20 in the third quarter, including 12 points from Monroe.

The Bucks blew a 19-point fourth quarter lead before Middleton hit the clutch free throw to give the Bucks the lead, then missed a second on purpose to make sure the Celtics wouldn’t get a good shot at the game winning basket.

Avery Bradley and Jae Crowder each scored 18 in a losing cause for the Celtics, who saw their four game winning streak come to an end.

The Bucks have one more game before the all-star break.  They’ll host the Washington Wizards on Thursday night.

AUDIO: Jason Kidd on why he brought Greg Monroe off the bench :20