You are here: Home / News / Cars break through ice during Lake Geneva festival 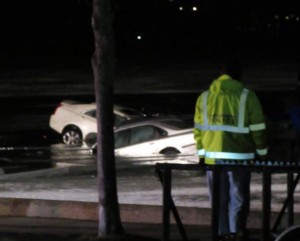 More than a dozen cars had to be pulled out of Lake Geneva over the weekend after breaking through the ice.

All of the cars were parked on the frozen lake Saturday, during the city’s Winterfest celebration. Officials said a total of 15 vehicles were at least partially submerged. All of them had to be removed from the water using tow trucks.

No one was injured, but 10 of the cars are considered total losses due to water damage. A video shared on Facebook shows the vehicles sinking into the lake Saturday afternoon.

The vehicles were among several parked on the lake while the owners were visiting the city for the U.S. National Snow Sculpting Competition, which runs through next weekend.